The Whitehall Division of Police Operations Bureau is made up of one commander and six sergeants who oversee a total of 25 patrol officers. The Operations Bureau is responsible for the safety of residents, business, and people traveling through Whitehall 24 hours a day, 7 days a week, year round. They patrol the neighborhoods in patrol vehicles and on specially equipped police bicycles.

Those interested in being an auxiliary officer must be a State of Ohio certified police officer and they must pass a standard hiring process. The hiring process includes an application, background check, criminal history check, employment verifications, credit checks, and oral interviews. View Auxiliary Officer Employment Opportunities >>

The school resource officer is a key component to the division's overall community policing plans and crime prevention efforts within the City of Whitehall. The School Resource Officer Program works with Whitehall City Schools and focuses on reducing crime in our schools and, equally as important, fostering positive relationships with youth. 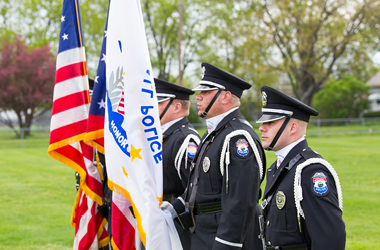 Request Honor Guard Attendance >>
The mission of the Whitehall Division of Police honor guard is to represent the department at funerals, ceremonial functions, and other special events as directed by the chief of police. The honor guard renders honors at the funerals of all Central Ohio officers lost in the line of duty, and also at funerals of both active and retired police officers as well as City officials. The honor guard serves as the color guard at various City events, as well as events held in the private sector.

We represent the department and serve as ambassadors of the City of Whitehall at events on the local, state, and national level and as such, its members strive to represent the highest standards of integrity, professionalism, and dedication to duty. Its current members consist of military veterans from each of the five branches of service.

The honor guard has performed annually as a featured unit at the Ohio Peace Officer Memorial Ceremony in London, Ohio, and the Greater Cleveland Peace Officer Memorial for over 25 years. In 2001, the honor guard won the silver medal at the International Police and Fire Olympics held in Indianapolis, Indiana. Participation in these events has brought national and even international recognition to the City of Whitehall and the Division of Police. The Whitehall Division of Police honor guard has been continually recognized for their outstanding efforts, their distinctive uniforms, and their outstanding performances adding to the quality of many events.

Special duty is off-duty, color of law employment that is authorized by the Division of Police but paid for by a private entity. Common uses for special duty include: 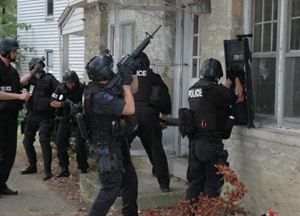 Together they utilize the latest in technology and equipment and are capable of handling any high risk police operation. The team regularly works in coordination with other local SWAT teams thereby acting as a force multiplier in other jurisdictions and in Whitehall. The division's SWAT team trains monthly and is actively called to 20 to 25 missions per year.

Tab under construction. Check back soon! 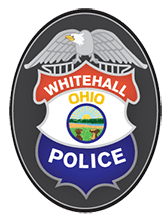